First discovered in Arkansas in 1971, sudden death syndrome (SDS) now affects nearly every state where soybeans are grown. SDS is an important disease because it can overwinter in soil, creating larger infected areas with each growing season until most of the field is diseased. SDS is most severe when soybeans are planted early into cool, wet soils and when heavy mid-summer rains saturate the soil. 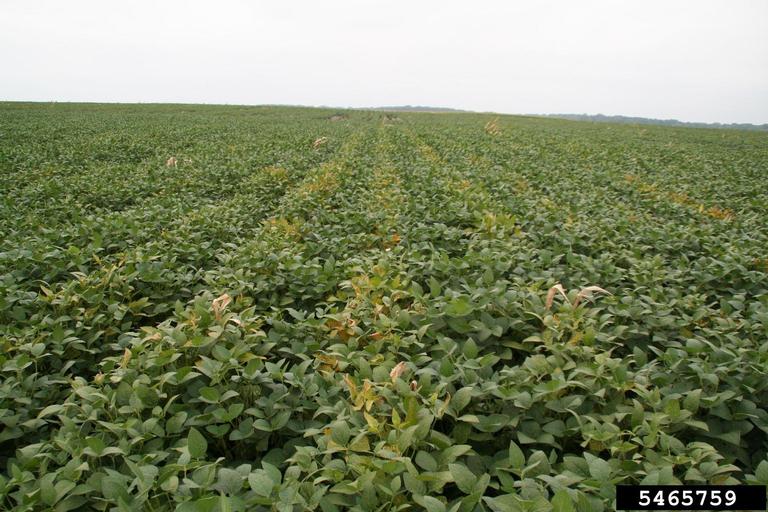 SDS is caused by the soilborne fungus Fusarium virguliforme. SDS overwinters in crop residue and freely in the soil. When the warm weather hits in the spring, fungi germinates and infects nearby soybean roots.

Symptoms almost never appear before flowering. Heavy rains during reproductive stages are conducive to SDS development. The fungus in the wet soil produces toxins that translocate to leaves and produce foliar symptoms. The fungus itself does not climb the stem more than a few centimeters above the soil line.

Symptoms first appear with the yellowing and defoliation of upper leaves. These first symptoms are often confined to a few sporadic areas throughout the field – often in wetter or more compacted zones.

As the disease progresses, other symptoms include: 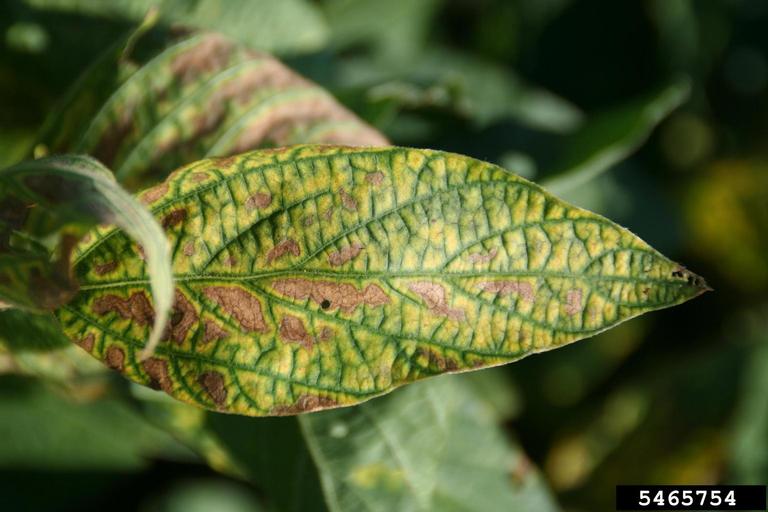 There are three strong indicators that a plant is infected with SDS: 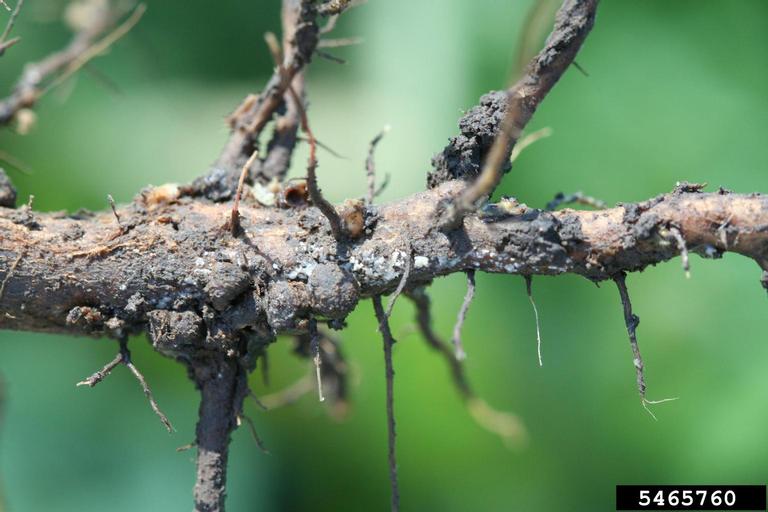 These roots are infected by SDS. Notice the white and light blue spore masses on the exterior of the taproot. Daren Mueller, Iowa State University, Bugwood.org

There are soybean varieties with low field tolerance all the way to full resistance.

Planting early predisposes the soybean to infection. Always plant the fields last where SDS has been found in previous years.

Rotation does not appear to significantly reduce SDS.

The extent of yield loss depends on the severity and timing of the disease relative to plant development. Early season development of SDS means the flowers and young pods might abort. Later season SDS development means fewer seeds per pod or smaller seeds. The earlier the prevelance of SDS, the more yield will be reduced. (Abney, Shaner, Westphal, and Xing 1).

Note: When a field has both SDS and soybean cyst nematode present, SDS is much more severe.

What else could it be?

AgraScout is a mobile crop scouting application designed for retailers that enables seamless, simultaneous communication between scouts, agronomists, and growers. Neucadia, the team of agronomists, systems analysts, and crop scouts behind AgraScout understood both the importance of scouting and the difficulty in passing on timely information found in the field. Neucadia built AgraScout because they wanted an easier, quicker way to communicate field information. AgraScout was designed to close the gap between what the scout sees and what the grower knows so whatever your role, you can make intelligent decisions about your business.